Jen and I spent an amazing weekend in Ocean City and Assateague Island. Ocean City Maryland is about a three hour drive away from us and it was absolutely gorgeous. It’s a big long island but it’s only long one direction, so if you go a few blocks east or west of the main road you’re at the beach. It was pretty crowded, and the visibility wasn’t great because of what looked like wispy fog. We stayed for a bit and then decided that a hotel for the night would be too expensive. Luckily Jen had thought ahead and looked up camp sites. One in particular stood out, a national park called Assateague Island. It was just a few minutes from Ocean City and it was AMAZING!!!!! 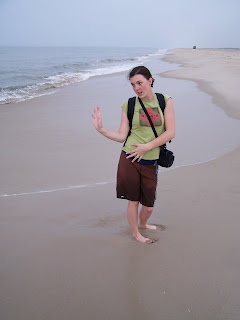 At Assateague Island they have wild horses and ponies all over the place (take a look at our flickr site for pictures of wild horses on the beach, right next to the water). The camp site was a three mile walk down the beautiful beach and was pretty much right next to the water! The only down side was that in the middle of the night the mosquitoes sneak attacked us. Jen left the tent to get some air and a blitzkrieg attack ensued. Luckily she managed to make it back into the tent while only letting in a few of them. In between the rain flap and the tent was another story. Check out the flickr pics (which don’t really do justice to the thousands of enemy attackers that congregated above our heads).

Since we were so close to the ocean, we decided to partake of the seafood that was EVERYWHERE! We ended up at a little place called Assateague Crab Shack where Jen got the Fish and Chips and I got the all you can eat snow crab legs, shrimp, and corn on the cob. It was great!

Anyway, it was a great little vacation for our weekend. We truly enjoyed the beach and each others company. It was one of the funnest times of my whole life!

This is my third week at my new job. Which is probably why it has been about that long since I have blogged! I am working at an all Jewish nursing home in Baltimore.

So far I love the residents. I am learning a lot about Jewish culture and all the rules of eating kosher. The facility is completely kosher which means that meat can never be prepared or eaten with dairy, no pork or shellfish and there are separate kitchens/fridges/utensils/plates/
pots/tupperware (all of which are kosher) for the meat and for the dairy. The Rabbi comes every friday for the shabbat (Jewish sabbath, which technically starts at sundown on Friday and goes until sundown Saturday). He sings all kinds of Yiddish songs that get stuck in my head and then I help to pass out the bread and wine to the residents. I’m not even Jewish and I get to help pass the bread and wine! Judaism is so rich in culture that I am excited for the opportunity to learn more about these wonderful people!

On the flip side…the actual job has been far from likable. This being my third week one would think that I would have a pretty good grasp on what is expected of me on a day to day basis. To be perfectly honest, I still feel like every day that I go to work is my first day. They have not trained me very well and I feel it is due to a lack of communication between the boss and the staff. Which I have come to an understanding is a common occurrence in this workplace. The boss at this job is not even a recreational therapist. She is an ADC (activities director certified) and yet she supervises three recreation therapists. Which throws a wrench into the whole system really.

Anyhow…long story short, while I love the residents, I’m not sure that I can stand to work for the boss. So I am attempting to find another job, but continuing to work at this one until I find something else.

It’s been awhile since I’ve written and Jen’s been so good about writing frequently so I thought I better throw in some Nicsdom (kind of a cross between Nick and wisdom, just roll with it). Jen and I didn’t do too much today. It’s the weekend so we’ve had some extra time. We took some pictures of ourselves (albeit impromptu ones) like this one: 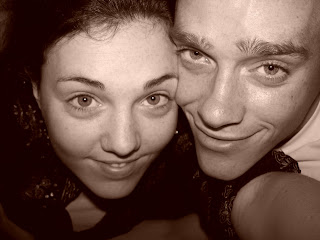 We went to the movies today. We saw the movie Baby Mama. Jen didn’t care for it much. I thought it was mildly funny. It was kind of a weak plot but oh well.
It’s been kind of a rough weekend for us. Jen’s still getting adjusted and I’ve been pretty sick. I have a fever and I’ve been unhappy all day. Jen starts her new job on Monday I think it will really help her.
I graduated Basic Photography earlier this week. It was nice to be recognized for working hard in the course, but it seems a little meaningless to have a graduation from one class into the next. I guess they have to do it because for the Air Force and Marines just have the one class before they head off for their duty stations.
Anyway, I’ll write more when I get a chance!