not sure why it’s so blurry…but here’s a video of the little man climbing the stairs.

P.S. To anyone who receives this in an email: just so you know this is actually my blog! I figured out how to send it to any email addresses I want automatically each time I post. So you don’t need to feel obligated to email me back each time. I have had several of you emailing me back every time I post, I do love hearing from everyone and if you want to, you can continue to email me back, I just don’t want anyone to feel like they HAVE to. Just thought I’d let you all know in case some of you didn’t realize. To see the actual blog go to www.nickandjenlloyd.blogspot.com

Well, one of the few upsides of being trapped here is Spain is that I got to go out and take some photos. This is going to be a long one…

My friend Mike and I caught a cab yesterday into town. After a few minutes of trying to explain what a beach was the cab driver finally got it. This is the beach in Rota, it’s absolutely gorgeous! There was hardly anyone around because it’s the off season and it was a little chilly. Nonetheless it was a beautiful scene. 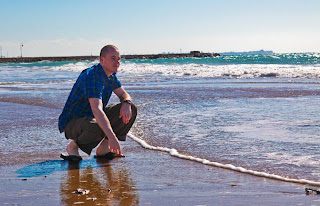 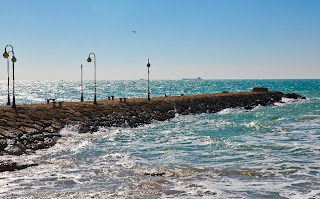 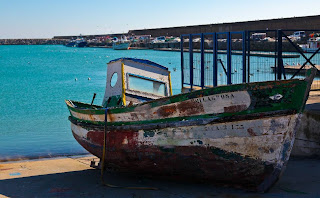 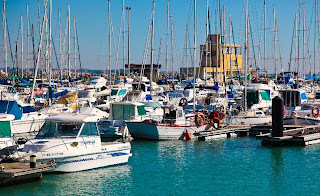 After the beach we got some lunch from a little Cantina right near the water. Mike got mixed fried fish (as you can see it looks like they pulled the fish directly from the water into the deep fryer) and I had the Swordfish which was quite good. We ate outside and a cat we affectionately nicknamed Whiskers came begging for scraps. As you can see, Whiskers must have had a little accident. He is trying (unsuccessfully) to scratch his ear with his nonexistent leg while his nonexistent tail doesn’t go back and forth. 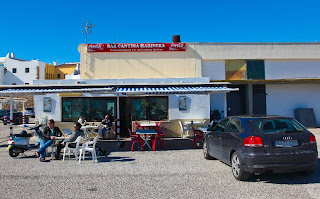 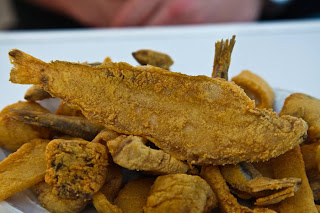 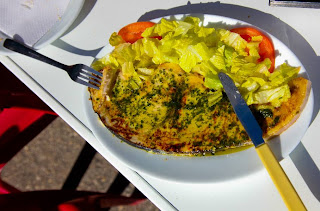 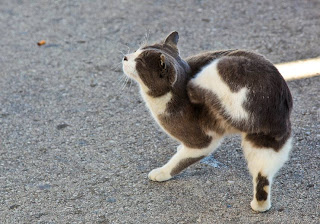 Anyway, after lunch we wandered around the city for awhile and I took some photos of the streets. They have these tile artworks all over the city that are really beautiful. 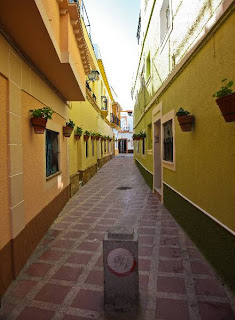 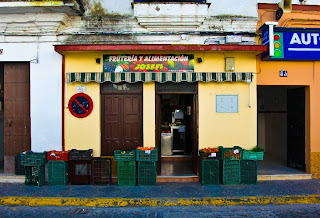 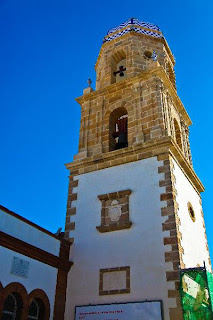 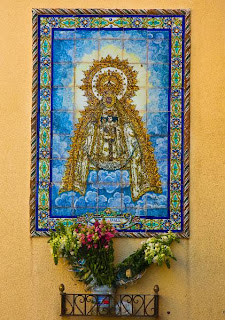 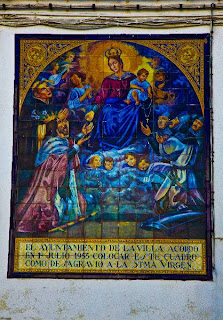 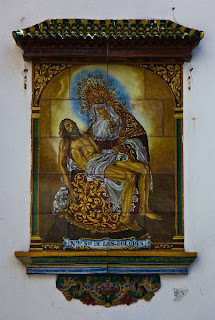 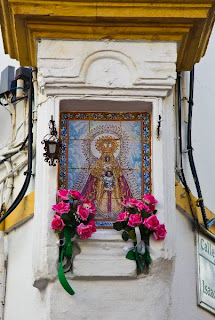 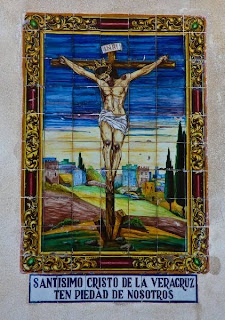 And lastly, I leave you with an image of a Spanish sunset. 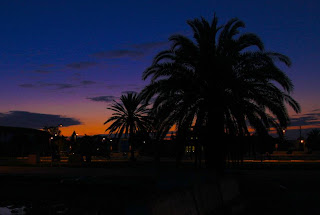 Hopefully I’ll be leaving soon, but I have to say that my time here hasn’t been all bad!

Jonah is on a roll with his milestones it seems! This morning while I was getting ready to go to work Jonah was standing at the base of the stairs (which has been his favorite activity lately other than pulling books off the shelf) and all of the sudden he put one knee up and climbed up one step. Then he proceeded to do it again. He stopped there and tried to find a way to get back down but couldn’t quite figure that one out.

Look out world…here he comes! I am sooo not ready.

So yesterday Jonah started saying “dadada”. As Nick likes to tell me about him saying “mama” though, I’m sure he doesn’t associate it yet. But he will soon enough!

TODAY the greatest thing happened! Jonah has been experimenting with letting go with one hand or the other after he has pulled up into a standing position. Sometimes he even lets both hands go and can balance for a second. Tonight as I was preparing to put him in the bath tub, he was standing outside the tub holding the edge of it when suddenly he let go, stood there for two or three seconds and then took a step toward me. After which he fell into my arms. The whole time saying “dadada”.

Whenever he is crying or upset he seems to say mama and whenever he’s happy he now says dada. I’m sure Nick will be excited to hear this! Jonah likes to look at pictures of Nick and he coos and laughs the whole time…and then tries to eat daddy.

So Nick called again today. And guess what? He’s still in Spain. At this point it is getting a little ridiculous and you might be asking, why in the world is he still in Spain? Well, the fact is, it’s because of the earthquake in Haiti.

The military has diverted all supplies and troops to Haiti. So that is why he was flying on an unreliable old C5…they were supposed to take a C17 but those are all in Haiti. And now he is stuck in Spain waiting for his plane to be fixed. And why don’t they send a different plane? They don’t have any. It is completely unheard of for this to happen. All the troops are on food and water rations because all their food and water is getting sent to Haiti.

And get this! The troops that are being sent to Haiti are being technically “deployed” there which means that when they get back, they will have at least 6 months if not more of “dwell time” which is the time after a deployment that they can’t be deployed again. SOOO…How in the world are we supposed to have a troop surge in Afghanistan when we are rendering so many of our troops undeployable by sending them to Haiti??? (at least 19,000 are in Haiti as of a few days ago, probably more by now, they are saying it could get up to 33,000. And by the way some units that were headed for Afghanistan were rerouted to Haiti!)

So by helping Haiti we are leaving our soldiers in Afghanistan (including Nick) with less man power and thus they aren’t as safe as they could be. Many soldiers who have already done several deployments and were hoping for a break are now needed to go again. And those soldiers that are in Haiti are not safe either. Things are pretty dangerous there as well.

Is it worth it? Are we spreading ourselves too thinly?

Jonah loves Algebra! And a lot of other books and newspaper. I think he’s pretty smart. Even if he is just trying to eat them! 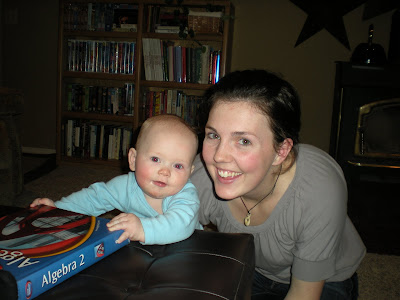 Well, as Jen said, I’ve been stuck in Rota Spain for about five days. Rota is a US Naval base on the south west coast of the country, well actually Rota is the city next to the base but it’s just called Rota Naval Base. It’s beautiful here, but I’m anxious to get to where I’m going. I went out on Wednesday night with a few friends and acquaintances and had a blast. We went to a little restaurant in the city and got seafood that was to die for, financially that is. Everything is pretty expensive here and the conversion from US dollars to Euros doesn’t help at all either. Anyway, I’ll post again once I get to Afghanistan. Jen & Jonah, I love you and miss you both!

Jonah is VERY proud of his new trick and does it every opportunity he gets. Of course, with this new found freedom come a few risks…hence the scratches and bruises on his poor little face. It seems like I’m always a few feet too far away to catch him, even though he always falls in what seems to be like slow motion. I’m starting to learn what it feels like to not be able to protect him from everything and I don’t like it! I suppose it’s a necessary evil. 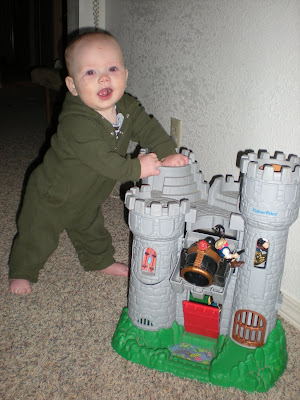 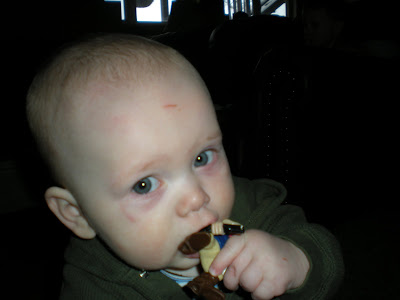 In Nick news…he has been stranded in Spain the last few days due to something breaking on the C5 he was traveling on. They apparently had to order the part they needed so they have been waiting on the shipment. As far as I know he will be on his way soon. Technically he should have been there a week ago. 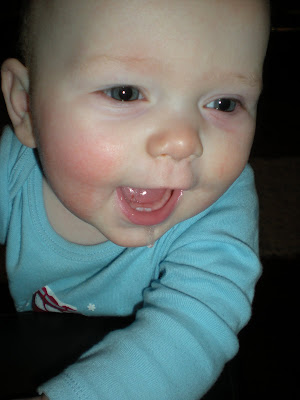 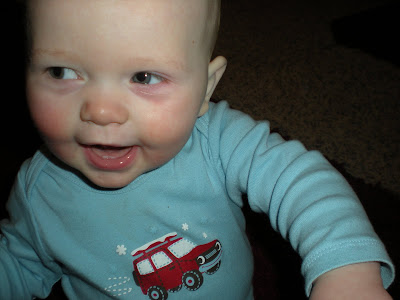 Right after I took this video Jonah crawled to me saying “mamama” the whole way. I had Nick on the phone and he was crying which made me cry…I knew this would be hard but I guess it’s hard to really understand how hard it is until you’re there. I wish so badly that Nick could be here to see Jonah grow and develop.

To Nick: I miss you SO much already. I love you more than I can tell you. I want you to know that I always kiss Jonah twice and tell him I love him twice, once for you and once for me. We can’t wait to see you again. You will be on our minds all the time. I promise you Jonah will know who you are. And I promise to take pictures and videos every step of the way so that you can be as much a part of it as possible.