So we saw the movie “the curious case of Benjamin Button” the other day, it’s about this man who grows from old to young. (They make him look like a really old and ugly baby!)

It was a good movie and there was this one scene in it where they reviewed how an accident happened. This woman was hit by a car. All because a woman was running late for work because she had to stop and get something but the girl who worked there wasn’t there cuz her boyfriend broke up with her the night before and the woman going to work went to catch a taxi, and the taxi was a few minutes behind because he stopped to get some coffee and a truck pulled out in front of them which slowed them down and then the taxi driver wasn’t paying attention and hit this woman (something to that effect) Basically saying that all the little things lined up just right for this accident to happen and had one little thing been different, it wouldn’t have happened. This scene has been on my mind this weekend as we have had our own little series of unfortunate events.

It began on Friday. Nick lost his military ID while we were at the hospital in Bethesda for my appointment. Then Saturday night, we were running some errands and Nick really wanted to trade in one of his Xbox games for a different one. But we couldn’t find parking at the mall, so I said I wanted to go home and he could get it later. So, later that night Nick decided it was time to go get that game. (Men have such one track minds…he can’t stop thinking about something until he gets it.) So he goes to get his game. When he comes back on base, he has to show his ID. As he’s pulling up the guard working, gets off work and the new one comes on. He shows his civilian ID, having lost his military ID. If you don’t have a military ID they always want to see your car registration as well. (They hadn’t checked this before b/c I was with him so my military ID got us on base no problem). It just so happens that the registration for the car is in my purse, because I’m trying to work out which state I’m supposed to register in (and no one seems to know, so there is quite a lapse of time in our registration…Nick having encouraged me to wait and wait and wait, why did I listen?). This particular guard was not as nice as most and decided she should call the MP’s (military police). So the MP shows up and looks up our registration, realizes it is expired and decides to go on a power trip. He handcuffs my husband, throws him in the back of the cop car very rudely and calls a tow company to take our car away. Nick did nothing to provoke him and explained to him that we were trying to figure out where to register the car. So Nick calls me from a jail cell needing a ride…but the only car we have has been towed. I pick him and our lovely fine from the oh so kind MP up and we call the tow company. They are not open until Monday. So today (Monday) I had a week long class that was starting that I wanted to take and I had to be there at 8 am. We decide we’ll pick the car up on lunch break. So Nick calls in the morning to renew the registration over the phone…they won’t let him. He comes to get me and says we can’t renew the registration over the phone because my credit card has my married name and the car is in my maiden name. So I call them and they let me. (But we’ve lost 15 mins of my lunch break doing this). We run to the tow yard. It is in the scariest part of town and is a complete HOLE. I was scared our GPS would no longer be there, and of course they put up the nice little sign about how they are not responsible for damage or theft. Come to find out though, they don’t take cash. SO we have to run to an ATM, get some cash and go back…pay WAY too much for the car that shouldn’t have been towed in the first place. I was an hour late getting back to my class.

What a wonderful day! Any little thing could have gone differently in the beginning and it wouldn’t have turned out so badly. Nick talked to a different MP today and he said that he would not have towed our car…he thought it was ridiculous. Had Nick not lost his military ID, had there been parking at the mall, had I just not worried about where to register the car and just got it done, it could have been different. Everything lined up just right and mixed in with a little of our own stupidity and we’re out a decent chunk of change that we could have gone on a nice vacation with. AUGH.

Does anybody else ever feel like nothing works out quite right for them? I don’t mean to complain, but I feel like that is the story of my life these days! I’m trying to be positive!!! It’s just not working too well.

Sorry so wordy…had to vent.

So I went to the Inauguration concert on Sunday night and also to the actual Inauguration on Tuesday and got some amazing photos…check it out! 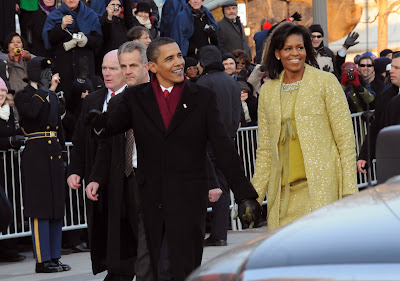 Yes, I was actually this close. It was amazing! There were sooo many people there, those of you that watched it on TV have an idea, but it was hard to move. It took me an hour and half to walk three blocks because there were so many people. For more pictures of the inauguration check out our flickr link on the right.

I’ve always thought that the holidays should be a little later in the winter. It seems like they are right at the beginning and then they’re over and you’ve got nothing but yucky winter for a few months. Which in Maryland apparently consists of gloomy skies and rain…no snow to make it at least a little pretty! 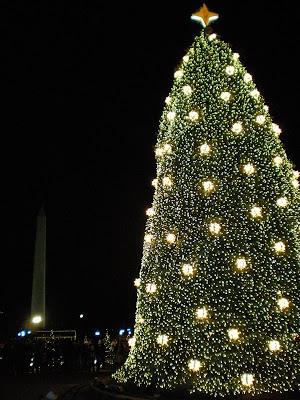 Before heading home for the holidays we made a trip to DC to see the national Christmas tree…it was pretty! We thought more of DC would be decorated as well, but it turns out it really wasn’t.

Then we headed home for our wonderful holiday vacation to both our parents’. Nick got to experience being an Uncle for the first time now that we’re married…below is a picture of our nephew playing in the snow. 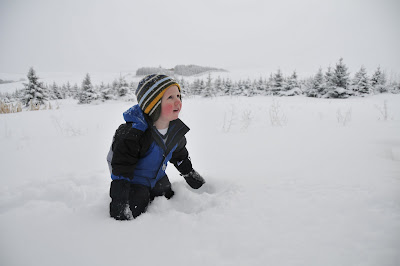 Our holidays were wonderful! We flew into Spokane where my parents picked us up. We spent the week of Christmas with my family. I love Christmas as my parents’ house because they have a Christmas tree farm in their front yard, so there’s always someone out there cutting down a tree, it’s quite festive. It was nice because it was the first chance Nick has really gotten to spend some time with my family. And oh boy did we spend time together! There was no escaping it! We were snowed in half the time; Northern Idaho has been all over the news for the amount of snow they got this Christmas. The picture below is my Dad trying to dig us out…it took ALL day! 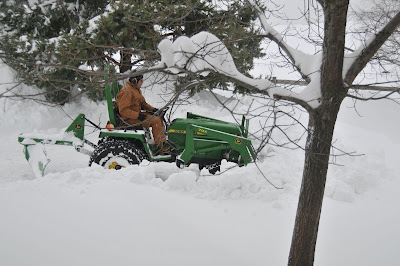 But lucky for us, the roads did miraculously clear up and we were able to make the drive down to Utah. We spent the week of New Years with Nick’s family. We had Cafe Rio 3-4 times within the week and Nick got to go skiing. (Grrrr. not me cuz I’m prego!) It was nice to be in Utah, to be home for Nick, and semi-home for me (I spent my college years mostly there).

Then to top it all off, that weekend we had our LONG awaited reception! We got married in February in South Carolina. We spent a few hours together and then had to part ways due to Nick’s training and my job commitment. Then in May, I moved here to Maryland. But Christmas was the first time we’ve both been back home since we got married so we decided better late than never and we had a reception. It did feel a little strange to wear a wedding dress while five months pregnant…but I was determined to get some nice wedding pictures and have a semi-normal wedding experience. We had a lot of people there and over all it was a success! Since it was in Utah, my mother-in-law Julie had to do a lot of the footwork to make sure everything worked out, plus she made my amazing cupcake tower! I’m so lucky to have great in-laws! Thanks to everyone that came to support us! Nick wasn’t all that excited to have a reception but ended up really enjoying it! I’ll get some pictures up when I get them from the photographer.

And here is the first belly shot! (And I AM wearing clothing, you just don’t see it in this shot 🙂 This is my belly at approx 23 wks and I’m pushing it out as far as I can for dramatic effect!

In honor of the gender of our baby (which we found out right before Christmas) I have changed the color of our background to this lovely blue…that’s right! It’s a BOY!

Oh and by the way, try out my new widget on the right there. Just click “get name” to see lots of different names…some of them are weird, but let me know if you see any good ones! (Nick and I can’t seem to agree on a boy name!)