One year ago yesterday Nick and I were married in Columbia, South Carolina. Since only his parents were there to witness it, let me paint a picture for you. Nick was graduating from basic training. His parents and I attended the graduation ceremony in the morning then headed for the courthouse to get our marriage license. Then, we went to this lady’s apartment and she married us in the lobby of the building while wearing a lovely outfit of pink velor! 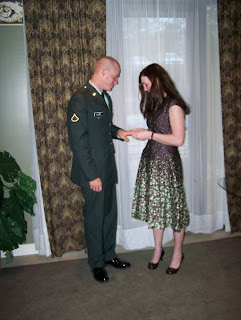 Nick and I spent 4 hours together, then he had to go back to the barracks. The next morning, I took a taxi and met him at the airport where I said goodbye to him for the next three months.
I then rented a car and went on “our honeymoon” to Charleston SC, very cute town, too bad for Nick that he missed it!

When I think back to a year ago it makes me laugh…what an awkward situation! I was nervous to tell people that I had gotten married because it was so last minute, we pretty much eloped! I always said I would elope but I never really believed it! But having been around other military families over the past year, I’ve learned that it’s not that uncommon to get married quickly and not see each other for awhile…and to have a reception nearly a year later.

Anyhow, it’s been a great year, we’ve seen and done so many neat things here on the East coast together, furnished and decorated our first home together, learned how to carpool, learned how to get along day to day, found out funny quirks about each other that we never knew, laughed, cried, got a puppy…and in May we’ll have a little bundle of joy to turn our world upside down. Happy one year anniversary to us! I love you baby!

Since I am now officially into the THIRD TRIMESTER I think it’s time for a prego update! Trimester number two flew by with no problems! I got my energy back, I lost that nasty nauseousness and I started to look like I was pregnant and not just fat! But now it’s over and it’s time for me to turn into a balloon! Lately I’ve almost forgotten that I’m pregnant because my tummy popped out really fast right after the holidays (all that good food!) but has stayed the same since. So i’ve gotten really used to the stage I’m in. But I have a feeling it’s gonna change soon. Crazy that it is now less than three months till our house will be a lot noisier! We can’t wait! 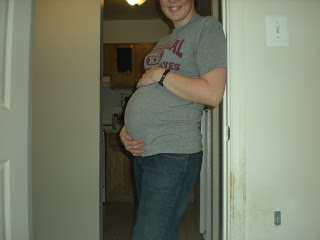 Other news…I have finally found a job! I tried so hard for so long to get a job in recreational therapy and it just wasn’t happening, so I finally started looking elsewhere. I am now working at the daycare here on the base. I’m not sure how all the bending down and sitting in itty bitty chairs or on the floor with the kids is going to be as I get bigger…but it’s a paycheck!

Nick is gone this week doing some training…I miss him a ton and I’m beginning to wonder how this whole deployment thing is gonna work for us. Zoey misses him too…I have the most ridiculous dog! She has been sitting at the front door whining since Nick left…what a goofball.

Our one year anniversary is coming up this Sunday! I can hardly believe it’s been a year now! And we finally got my beautiful wedding ring fixed to the right size so I can wear it! I love my ring…Nick’s family friend, Doug Peterson, makes custom jewelery in Salt Lake City and does a beautiful job, take a look: 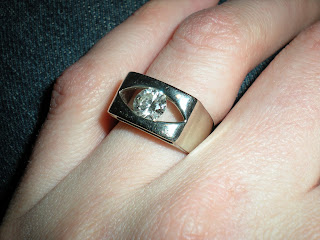 I recently decided to start making custom vinyl signs. For right now I am ordering my vinyl from a girl from my hometown, if all goes well I may just invest in a vinyl machine of my very own! I’m super excited about this new venture and hopefully people will like what I do. Vinyl signs are the latest thing in home decor and make any home look more like home! So check it out, let me know what you think! 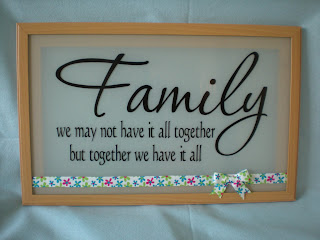 SO! If you live in the Baltimore/Washington DC area, or know someone who does, spread the word! Check out my new blog…www.signsofhome.blogspot.com
I will be posted all of my latest projects on the blog, but you can also make custom orders (it’ll just take a little longer).

This last week was “restaurant week” in Baltimore. Ton’s of restaurants participate and charge only $30 for a three course meal. So of course, we went through and picked out the most expensive Italian restaurant in the Little Italy section of town and decided to celebrate valentine’s day early (since Nick will be gone for a training on Valentine’s day anyways.)
It was of course, wonderful. But there are a few little things about fancy pants restaurants that I don’t favor. It seems, that the more expensive the food is, the less you get of it. Normally when I think Italian, I think a BIG plate of food. While this was solved by the fact that there were three courses (I don’t think I’ve EVER had three courses at a restaurant!) it is still a little annoying to look down at your sparse plate. The other funny quirk about expensive restaurants is that everyone is very quiet, and the tables seem to be extra long. So if you want to talk to your significant other way over there, you can almost guarantee that everyone around you can easily hear you. Not to say that I like the really rowdy restaurants, but a little noise puts me at ease.
So the moral of the story is…a hoity toity place is fun every now and then, but I think I’m just too “country” to go there too often. But yes, the food was oooh so good. Happy early Valentine’s day!