Jen is very perturbed. Want to know why?

As you can see, Jen and the puppy are really enjoying themselves. This video was brought to you courtesy of our new video camera that I’m kinda excited about. Another camera to stick in Jen’s face!

One of the many benefits of living on a military base is access to the commissary and post exchange which provide tax free shopping. But, there is a catch. After a few visits to the commissary to pick up my weekly groceries, I realized that at the bottom of the receipt where it normally says “tax” and an amount, it says “surcharge” and an amount. I asked the cashier what this “surcharge” meant and her response was “it’s like a tax”. HA! I couldn’t help but laugh out loud right there. Tax free my eye! Sure…the money probably doesn’t go to the same place as normal grocery store tax, and it is definitely a smaller amount, but still!

AND THEN….there are the “baggers”. You know the person that bags your groceries for you at the checkout? Here on post, they work for tips. I’m not sure who came up with this idea, but it really bothers me. The thing is, they have a different kind of cart than the normal shopping cart so if you want them to bring your groceries out then they put it on their little cart and walk out with you, at which point you are supposed to tip them a few dollars. So, in order to avoid this, you have to tell them as they start bagging your stuff that you want it back in YOUR cart. At which point they realize that you don’t want to tip them, but they still have to bag your stuff. So they turn on you, instead of being overly friendly to get the best tip, they bag your stuff however it suits them. That’s right, canned goods on top of your chips. It always makes me feel kind of bad, but truthfully I don’t carry cash on me anyhow, so I wouldn’t be able to tip really. I just wish that their boss would pay them enough that I wouldn’t have to tip them to do their job! I hate even tipping waiters…that’s why I love Australia/New Zealand. They consider it rude if you tip a waiter because it’s like saying that you don’t think the restaraunt pays enough. Just pay your employees what they’re worth here people!

Yesterday we had a special delivery at our house. My Mom bought us a brand new washer and dryer! We are soooo excited to be able to do our laundry from the comfort of our home and not at the scary laundromat. THANKS MOM! 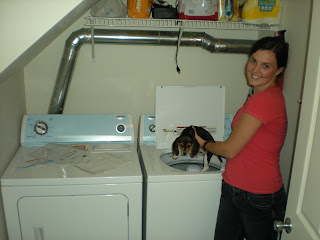 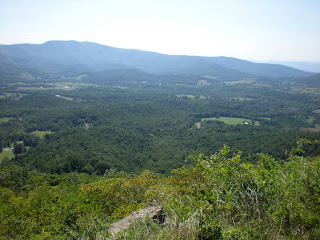 For Labor Day weekend we decided to find the nearest national park and go camping. Seeing as how we live on the East Coast, we figured the woods would be the least crowded place to be on this three day weekend! So we headed down to Virginia to the Shenandoah national park which overlooks the historic Shenandoah valley and river. We discovered though that even the woods are crowded here on the east coast. The campgrounds we went to were cramped…tent sites no more than 20 ft. apart and the place was FULL! We made tin foil dinners and s’mores and then as it began to get dark we realized we’d forgotten a flashlight, so we went to bed.

We talked to a very strange park ranger…we were asking him about another campground further down the road to see if it was less crowded and his response was “that one has a lot of history, you should read up about it. This country used to be a lot more segregated you know.” I thought this was a very strange comment. I looked it up and here is what I found out:

In the early 1930s, the National Park Service began planning the park facilities and envisioned separate provisions for “colored guests,” as African Americans were described in contemporaneous government documents. At that time, in Jim Crow Virginia, racial segregation was the order of the day. In its transfer of the parkland to the federal government, Virginia initially attempted to ban African Americans entirely from the park, but settled for enforcing its segregation laws in the park’s facilities. By the Thirties, there were several concessions operated 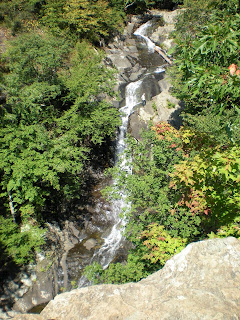 by private firms within the park, some going back to the late 19th Century. These early private facilities at Skyland Resort, Panorama Resort, and Swift Run Gap, of course, were operated only for whites. By 1937, the Park Service accepted a bid from Virginia Sky-Line Company to take over the existing facilities and add new lodges, cabins, and other amenities, including Big Meadows Lodge. Under their plan, all the sites in the parks, save one, were for “Whites Only.” Their plan included a separate facility for African Americans at Lewis Mountain — a picnic ground, a smaller lodge, cabins and a campground. The site opened in 1939, and it was substantially inferior to the other park facilities. By then, however, the Interior Department was increasingly anxious to eliminate segregation from all parks. Pinnacles picnic ground was selected to be the initial integrated site in the Shenandoah, but Sky-Line continued to balk, and distributed maps showing Lewis Mountain as the only site for African Americans. During World War II, concessions closed and park usage plunged. But once the War ended, in December 1945, the NPS mandated that all concessions in all national parks were to be desegregated. In October 1947 the dining rooms of Lewis Mountain and Panorama were integrated and by early 1950, the mandate was fully accomplished. (Wikipedia)

In the morning we took Zoey on her first hike up whiteoak canyon to some beautiful waterfalls (see the picture above, can you find Nick in it??? They were HUGE!) She did amazingly well 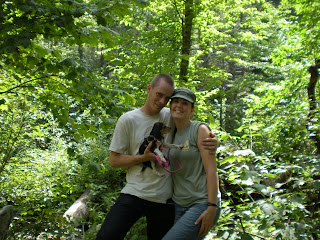 being so little. She made it almost the whole 5 miles. The hike probably took us twice as long as it should have due to the fact that people simply cannot resist stopping us to tell us how cute Zoey is. And of course, Zoey knows she is cute. When they stop to pet her and talk to her she wimpers and whines. We’ve had more social interaction with strangers in the last week than we have in the past year combined I’m pretty sure.