When you pull the pieces apart the bees cling to each other and make little bridges trying to hang on. 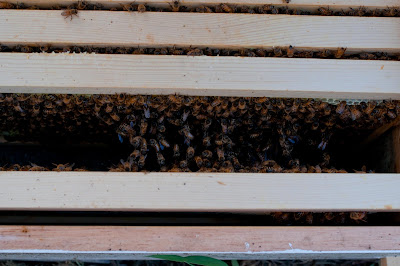 See the queen? She’s all black. 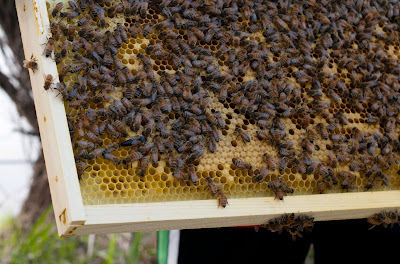 Taylor in the bee suit. 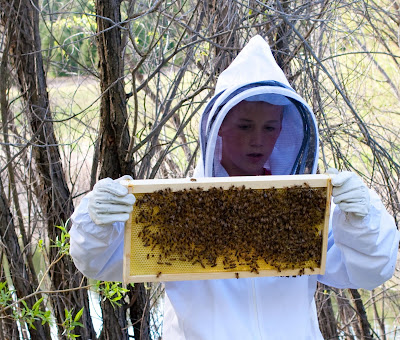 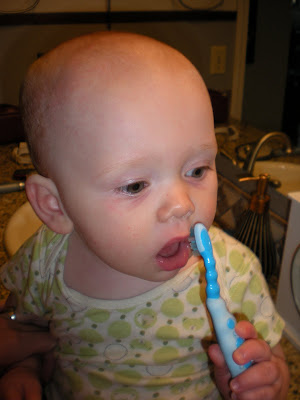 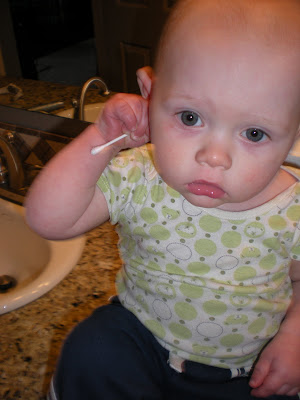 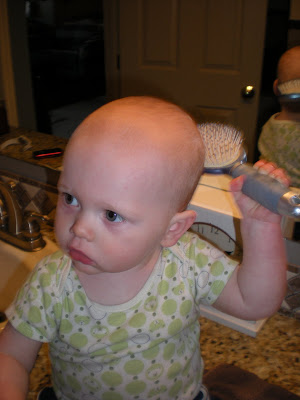 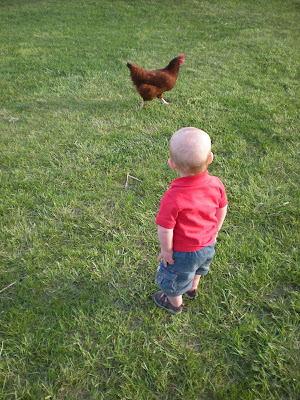 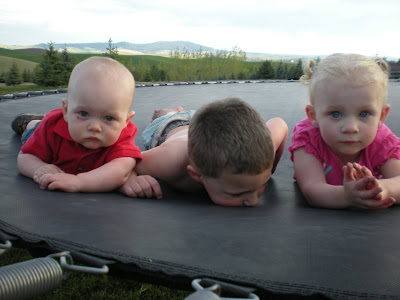 Jonah LOVES to go outside. Every time the door opens he rushes to attempt an escape. He loves to run around outside, chase the chickens, pet the dogs and feel the dirt. He loves to jump on the trampoline with his cousins. But he hates the swing…which is funny because I hated the swings too. Actually I still hate the swings. For some reason I got it in my head when I was little that if I swung too high I would flip over the top and it still scares me. 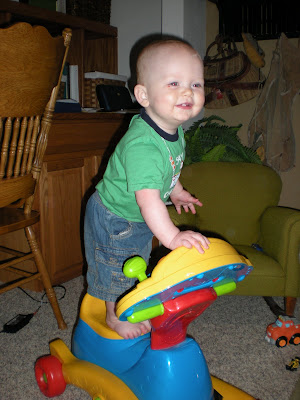 Jonah is becoming quite the little daredevil. He likes to stand up on his little bike thing. Just today he stood up on the seat, no hands and started dancing and laughing. Yes he falls sometimes, but he still keeps doing it. He likes to climb everything. Shelves, washing machine, I’ve caught him several times as he’s almost flipped head first into the bath tub. 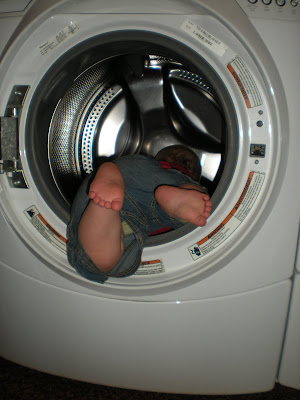 He is a happy boy, but he is happiest in the morning. Right after he eats breakfast, I get him out of his high chair and he claps. Then he proceeds to run all around the house yelling. He yells about everything…my sister laughs at me when I say he’s singing or talking or whatever it may be, she says it all sounds like yelling to her. What can I say, he was born yelling really. 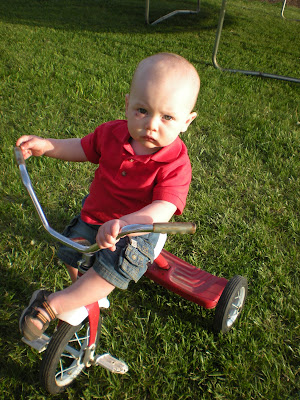 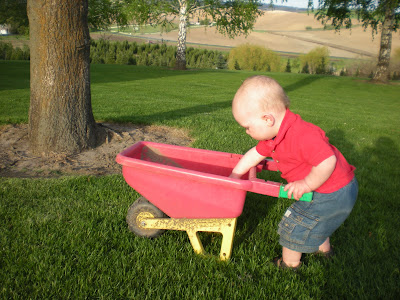 In other news, Carson found a little yellow bird in the house. Not sure how it got in. Taylor caught it and as he was setting it free it stayed for about a minute. Cute little birdie. 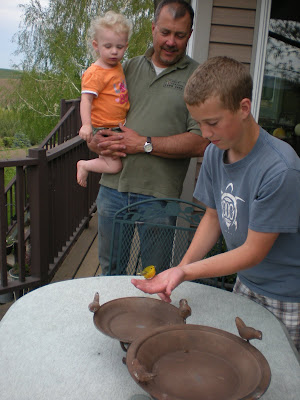 I am continuing to train for my triathlon and have registered for a sprint triathlon on July 25th, as I’m not sure I’ll be able to make it to the Olympic one on Aug 8th. One of the perks to this triathlon thing is that I have lost weight…I just bought the smallest pair of pants I’ve bought since, well, maybe ever. (Although I do think that sizing may be changing with the times…people getting bigger, sizes are too) I spent several days at Nicole’s house last week quilting…still not done with the dang thing but getting a lot closer. I haven’t been working too hard on my other goals, motivation just hasn’t been my friend lately. I have been playing Bunco once a month with some ladies from the ward, biking to lunch on Wednesdays with some ladies and I guess you could say maybe I’m making friends.

I am missing Nick like crazy. I want him to come home tomorrow and never leave me again. Sometimes I feel really lame having to tell people I live at my parents house…but I guess it’s better than being alone in Maryland. I miss my house. My own space. The green, green springtime of Maryland. I miss my weekend partner in crime…my sidekick to every adventure, my sounding board. I keep telling myself that it won’t be too much longer…but it still FEELS like it’s gonna be forever! But thank goodness the weather has finally warmed up anyways. How could you not love this face? You can see that top tooth too! Jonah and I went outside today to help Grandma plant flowers. I realized that we both need a little more dirt in our lives. Apparently we’re both a little girly, but don’t worry Grandma is going to break us in. 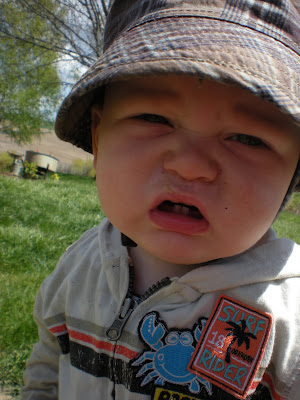 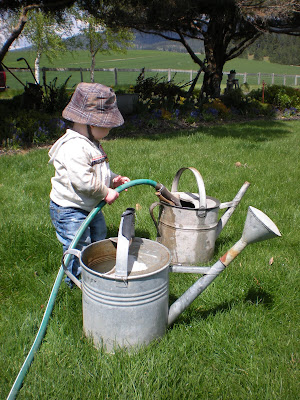 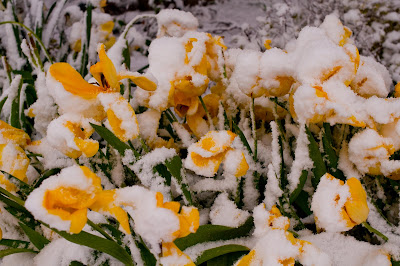 So for Cinco de Mayo this year in Idaho it decided to SNOW. Is anyone else ready for it to get warm already??? Here I was laughing at Washington DC for getting record amount of snow, but I’m thinking maybe that’s the way to do it instead of spreading it out all the way into MAY!

Today Jonah had his one year old check up! His stats are as follows:

Hard to believe when you look at the squishy boy that he is actually “long and lean” for his age! Of course after all the measurements came the dreaded shots. He screamed and turned on the water works but he’s alright now. Apparently he has a pretty bad ear infection. I kept thinking that he was grumpy because his top two teeth are trying to make an appearance (one finally did a few days ago, yay! That’s his third tooth). He’s a trooper. 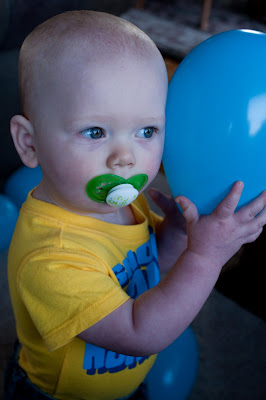 On Sunday we celebrated Jonah’s very first birthday with a family party. We had grilled cheese and tomato soup for dinner. Then we opened presents. Jonah was very overwhelmed with all the presents. After opening the first one he just wanted to play with that toy and wouldn’t really open any more. So Sadie and Carson gladly helped him out. He got lot’s of fun toys and books. 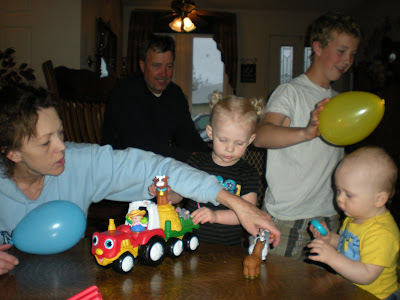 Then we had cupcakes. At first Jonah would just stick his fingers in the frosting and then lick his fingers off. He finally started eating a little more quickly and then it was all gone. He made the sign for “more” and grandma quickly obliged. This time Jonah shoved the whole cupcake in his face, as if he was trying to eat it in one bite. 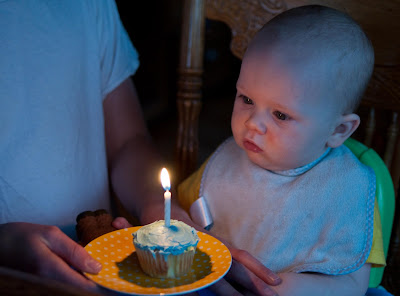 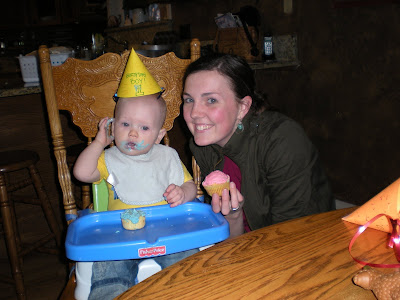 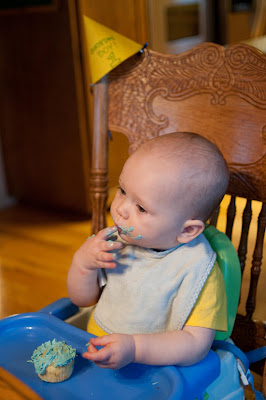 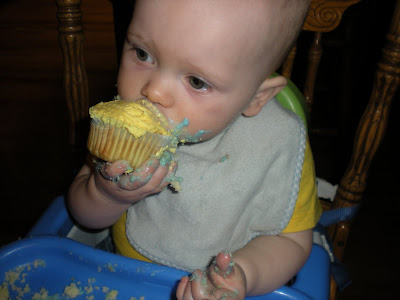 Overall I think it was a good party. Jonah was overwhelmed with everything but I think he enjoyed it. He went to bed very easily that night and in the morning he headed straight for his new toys. I can’t believe my baby is ONE! 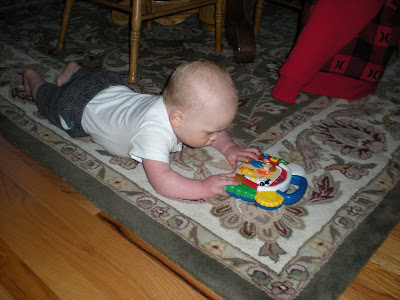 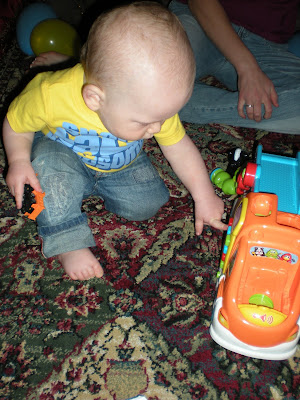 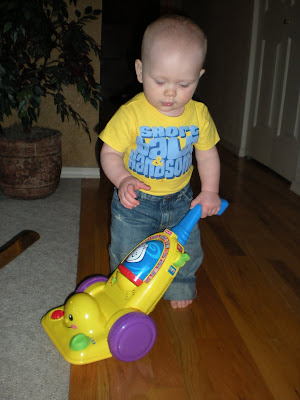 Thanks to everyone for the happy birthday wishes and for helping make his day special!

I seriously cannot believe that it is already May 2nd again! Is that even possible? Happy Birthday Jonah! We miss you today Nick…well every day really.

Jonah has finally figured out how to go down the stairs! I’ve noticed over the past few days that he has figured out how to get down off the bed without hurting himself, by turning around and going feet first. I was wondering when he would start applying this to stairs, and it didn’t take long! Today we found some carpeted stairs (a bit easier than the hardwood and Grandma’s house) and he wanted to go down again and again. It was hilarious to watch though because before completely turning around he would stick his leg out to the side and point his toe, feeling for the edge of the first stair.