So within the same week it has happened AGAIN! 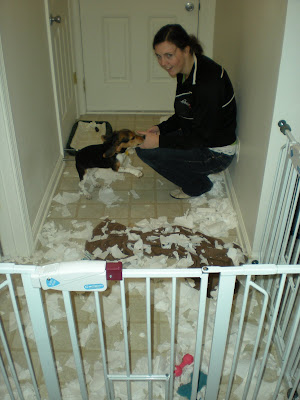 Not only can our little Zoey reach the magazine on top of the toilet, she can also get to the top of the washer/dryer where we set the toilet paper (so as to be out of her reach!). And she did. While we were out getting some Mexican food that Nick was so desperately craving, Zoey tore apart a whole roll of toilet paper. I gotta admit, it wasn’t quite as funny this time! 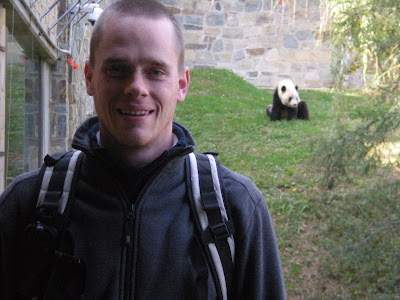 Nick and I went to the D.C. zoo a few weeks ago for his birthday (that’s what Nick wanted to do for his Birthday! I think he is trying to feel younger cuz he thinks he’s so old now). They had some cool animals that we’d never seen before…impressive zoo for being free! Anyone heard of a sloth bear? Couldn’t get a picture of it but it was cool! 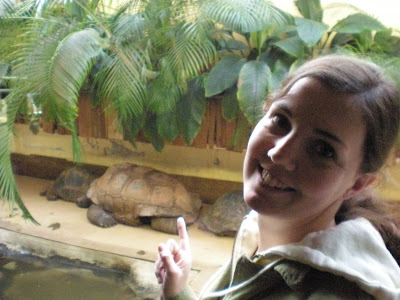 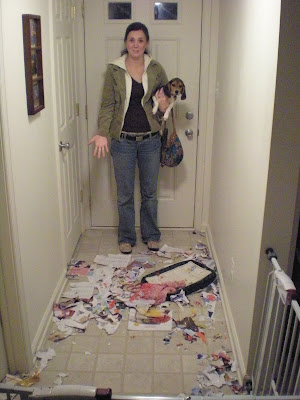 Zoey had completely destroyed a magazine that she pulled off the top of the toilet. (That’ll teach us not to put the lid down!) I would have been mad but I really just couldn’t stop laughing! She tore that thing to shreds! There was not page left whole. Crazy puppy!! Thankfully this is the first time she’s really done any damage, and it was only a magazine.
I’m getting really worried about leaving her at the kennel for 2.5 weeks over Christmas…I think she’s gonna go crazy! She loves attention so much and gets bored easily, I don’t know what she’s going to do! I guess maybe we’ll have to leave a few magazines for her.

Since announcing that I was pregnant I haven’t really talked about it. So here’s an update! Yes, I am starting to show and no I will not be putting up a picture just yet! I feel like I’m in that stage where people can’t tell yet that I’m pregnant I just look a little fat in the tummy. When I sit down I have to unbutton my pants or else I’m really uncomfortable. I’ve started experimenting with using hair bands around that top button of my jeans to give it a little more stretch.

Bad smells still make me want to vomit, but for the most part I’m over the nausea. I really only lost my cookies (actually it was usually pancakes, strange) 4-5 times, but I felt like I was going to lose them all the time! Lately my biggest problem is I only feel rested when I’ve had 10-12 hrs of sleep, and sometimes even then I want more sleep! Nick gets up at 6 am and I spend a lot longer than that sleeping in! It makes me feel a little lazy…but I’m not sure that even if I had a reason to get up early (like a job) that I would get up!

Our next doctor’s appointment in next Monday, after that appointment we get to schedule our ultrasound to find out the sex of the baby…hopefully we’ll squeeze it in before Christmas! I keep telling Nick though that if they tell me it’s a girl I’m not going to believe them…you just never know!

As far as cravings…sometimes I would swear that Nick is the one that is pregnant! He craves things way more than I do…and he won’t stop asking for it until he gets it. This past month was terrible on our budget, Nick was constantly craving some restaurant. And of course, I’d go with him! I’m pretty sure he’s just decided that he likes the whole “sympathy pregnancy” thing. Hopefully it’ll help him put on a little weight, he needs to!
And that’s it for today’s baby update! 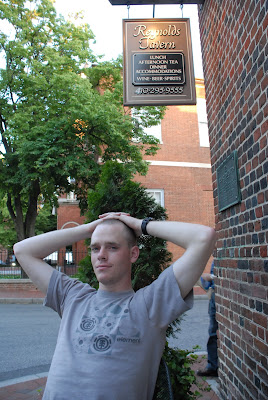 AND…happy veteran’s day! It’s almost been a year since he joined the army! What an old veteran!

Alright people…recently Nick has decided that he has found his “photo face”. I completely disagree…and I need a second opinion to convince him. So if you read this, please comment. (Those of you that don’t have a blog can comment! Just click on the comments thing at the bottom and comment anonymously but sign your name.)

Which do you like better? (Keep in mind that these are not photo-shopped and they may not be the best pictures photographically speaking and I look like a dufus in #2…we’re just looking at his face here.) 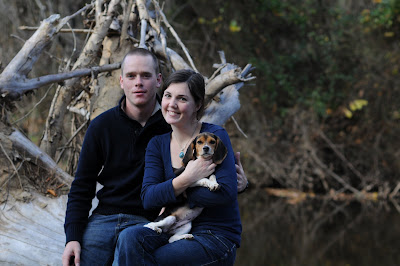 # 2:
Poor Zoey was freezing cold the whole time cuz she jumped into the water silly thing! 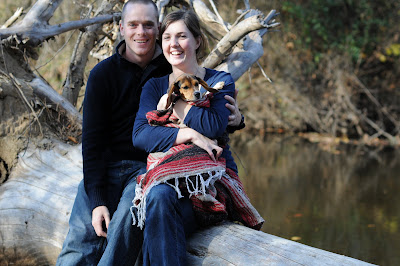 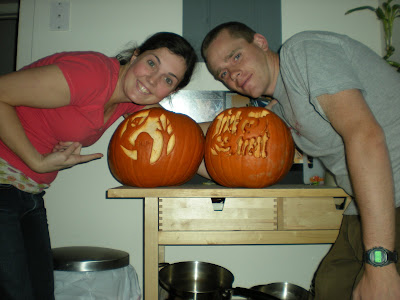